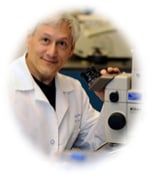 Dr. Jeffrey Robbins received his Ph.D. in Genetics and Development in 1976 from the University of Connecticut and is currently Professor of Pediatrics, Division Chief of Molecular Cardiovascular Biology and Executive Co-Director of the Heart Institute at Cincinnati Children’s Hospital and Distinguished University Professor at the University of Cincinnati. He has continuously been funded by extramural grants since the beginning of his academic career, starting with an undergraduate award while at the University of Rochester from the Atomic Energy Commission.

After receiving his graduate degree, he took a fellowship with Dr. Jerry B. Lingrel at the University of Cincinnati, where he led the experimental team that first isolated and purified the goat globin genes. In 1978 he was recruited to the College of Medicine’s Biochemistry department at the University of Missouri-Columbia as part of a group of 5 new faculty to start a molecular biochemistry initiative at the Medical School. After promotion to Associate Professor with tenure at Missouri, he was recruited back to Cincinnati in the Departments of Pharmacology and Cell Biophysics, Molecular Genetics and Biochemistry, and Molecular Physiology at the University of Cincinnati College of Medicine where he rose through the ranks to full professor. He has won a number of teaching awards, including the Golden Apple.

It was during this time that he initiated the research to define the elements necessary for cardiac specificity of the transcriptional apparatus. Success in this area led to the development of reagents that are currently used worldwide to affect the protein complement of the heart through transgenic manipulation. Dr. Robbins, along with hundreds of other scientists, has used these tools to mechanistically explore the structure-function relationships of cardiac proteins. His work has focused on understanding the behavior of both the normal contractile proteins and the mutations that cause cardiovascular disease. Recognizing the limitations of the murine models, Robbins also developed the necessary reagents needed for controlled, cardiomyocyte- and developmental stage specific expression in rabbit hearts and pioneered a series of transgenic rabbits that tested the isoform functionality of selected sarcomeric proteins.

Dr. Robbins unambiguously showed the utility of the general approach and developed a set of robust reagents that could be used by relatively inexperienced investigators to create animal models of cardiovascular disease. Dr. Robbins’ work has changed the way in which we explore the basic pathology of cardiovascular disease. With well over 1200 different models being developed and published using his reagents, the work that Dr. Robbins published allowed the entire field to move forward at a pace undreamed of only 15 years ago. A contributing factor to the rapid spread of the technology was Dr. Robbins’ early decision to make the reagents freely available, allowing the rapid dissemination of the needed tools, free from the confines of university intellectual property concerns. Recognizing that temporal control of mutant gene expression is as important, or even more important than organ specific expression, Robbins devoted 4 years to establishing a robust system for both temporal and organ specific cardiac transgenesis, controlled by the administration of tetracycline.

Dr. Robbins went on to use gain-of-function approaches to further his own investigations into the underlying pathologies of hypertrophic cardiomyopathy, as well as defining the structure-function relationships in a number of the contractile proteins. His recent experiments have established the importance of mutations in the intermediate filament protein desmin and the chaperone alpha B crystallin as causative for a class of cardiomyopathies, which has recently led to the startling observation that intracellular pre-amyloids appear to play an important, and possibly generalized role in cardiovascular diseases of various etiologies. He subsequently developed the concept of proteotoxicity playing an important role in cardiac disease and heart failure, opening up new therapeutic avenues in cardiovascular disease. Recognizing the potential parallels between the neurodegenerative and cardiovascular disorders, Robbins hypothesized that unfolded proteins might form in an under-recognized class of myopathies, the Desmin Related Myopathies. Robbins went on to show that protein conformation-based disease processes are important during the development of heart disease and failure and, on the basis of his early work, the study of proteasomal compromise, chaperone dysfunction and protein aggregation in the heart is now an established experimental field.

Dr. Robbins is a Fellow of the International Society of Heart Research and the American Heart Association and in 2011, he was elected a Fellow of the International Academy of Cardiovascular Sciences. He has served on and chaired numerous national research review committees for the National Institutes of Health and the American Heart Association. He currently serves on 10 Editorial Boards, is Associate Editor for a number of journals and served as Cardiovascular Section Editor for the Annual Review of Physiology for 10 years. He also serves as Senior Associate Editor for Circulation Research, which is the premier basic science journal for cardiovascular science. He has won numerous research awards and, in 2005, was the recipient of the American Heart Association’s Research Achievement Award. He was chosen to Chair the National Study Panel for the American Heart Association’s program for establishing centers for Stem Cell Biology in the heart, the Jon DeHaan Competition and assumed the Chairmanship of that oversight committee. In 2009 he received two prestigious awards from the University of Cincinnati; the Rieveschel Award and the Drake Medal. The next year, he received the Distinguished Research Achievement Award from the International Society for Heart Research. In 2015, he received the prestigious Louis and Artur Lucian Award for Research in Circulatory Diseases and in 2017 he received the highest award given by Cincinnati Children’s Hospital, the William Procter Medallion, which the Medical Center has given its faculty only 11 times in its history, the first recipient being Albert Sabin in 1960.

Dr. Robbins has been publishing in the field of cardiovascular biology for approximately 25 years. With over 260 publications, his contributions have changed the way that basic cardiovascular research is done. Robbins’ work has consistently resulted in “scalable” data. That is, the data, or reagents resulting from the data, are generally applicable to the broad field, allowing numerous investigators to use Robbins’ result and apply them to their own investigations. Thus, the implications of Robbins’ data have been tremendously valuable and synergistic to the broad field of cardiovascular research.